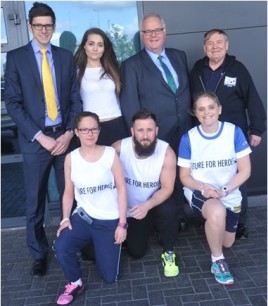 A chance meeting at the gym has resulted in Bromleys sponsoring a team running for the Future For Heroes charity in the Brathay Windermere Marathon in the Lake District, which takes place on Sunday 17th May.

Bromleys’ support has funded the team’s t-shirts for the event, which takes place on Sunday.

The race, which is in its ninth year, is regarded as the UK’s most scenic marathon. It starts and finishes at Brathay Hall at the northern end of Lake Windermere. The event is also a real challenge for the 1500 participants due to the undulating nature of the course.

Future for Heroes, or F4H as it is commonly known, is a charity set up specifically to help former service men and women (particularly those suffering from psychological conditions as a result of their time in service) reintegrate back into society. Part of this process involves sending the heroes on a residential course where they undertake outward-bound activities and classwork which is shown to make them more receptive and motivated to get into work.

Kevin Hartley from Mossley, who has been involved in the charity from it’s beginnings in 2007 and is the charity’s main contact for the North West,  is a business contact of Bromleys’ John Longworth. The pair began chatting about Future for Heroes when they met at their gym in Ashton-under-Lyne. John and Kevin quickly realised that there were clear parallels between Bromleys and F4H; both are based in Tameside, and both have a close connection to Windermere – F4H operate their courses from Brathay Hall. Bromleys’ Judy Bell lives in and operates her family law practice from Windermere with the full support of the team of experts in Ashton.

John agreed that the firm would support the charity by funding the team’s specially-designed marathon t-shirts, and they were handed over to Kevin earlier this week.

On Sunday, Bromleys’ Judy Bell, who lives in Windermere, will join Future for Heroes volunteers at their stand at Brathay Hall as a further show of support.

Mark Hirst, senior partner at Bromleys, said: “Future for Heroes performs excellent work in helping past and present service personnel to successfully manage the dramatic changes they face when they return to civilian life, so they can participate fully in society.

“We are delighted to support their fundraising efforts in this weekend’s Brathay Windermere Marathon, and wish them all the best for the race and their future endeavours.”

More details on Future For Heroes are available here: http://www.f4h.org.uk/