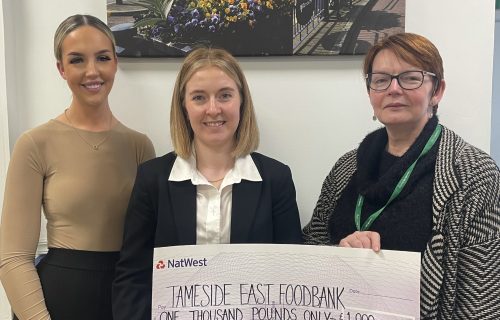 A food bank which is providing parcels for a record number of families has received a £1,000 boost from Tameside law firm Bromleys.

The Tameside East Food Bank, which is run by The Trussell Trust, fed nearly 6,000 people in 2021 as families struggle in the face of rising energy bills and a cut in Universal Credit.

The Trussell Trust was Bromleys’ charity of the year for 2021 and the firm raised £1,000 through a series of raffles, dress down days, book sales, staff donations and a sweepstake for last summer’s Euros tournament.

Staff at Bromleys, which is based in Ashton-under-Lyne, also donated non-perishable food items to the charity, including pasta, cereals and tinned goods, along  a range of toiletries such as shower gels, toothpaste and deodorants.

Jean Fitzsimons, project coordinator at the Tameside East Food Bank, which is based in Ashton, said: “In the first full year that our food bank was open in 2013/14, we fed just under 3,600 people. In the last financial year, we fed almost 6,000 men, women and children and 194 in the week before Christmas alone.

“Unfortunately, due to many factors, including the Universal Credit uplift being cut and the increase in fuel bills, many people are having to make the decision about whether to put their heating on or put food on their tables. The need for food banks is not going away.

“Supporting us with donations of food and essentials means that we can keep our four centres, in Ashton, Stalybridge, Millbrook and Dukinfield well-stocked with the items that are included in our nutritionally balanced food bank parcels which cover three meals per day over three days.

“Cash donations enable us to supplement the stores in our warehouse if we are running low on specific items. The generous donations from the Bromleys’ teamwill help us to continue to support people in Tameside who are currently in crisis.”

Solicitor Hannah Williams, a member of Bromleys’ charity committee, said: “As people will appreciate, we have been somewhat restricted as to the fundraising events we could put in place, but we are delighted with the amount we have been able to raise.

“Working in the child care team at Bromleys, I know all too well the struggles families face and it really can be a decision as to whether they ‘heat or eat’.

“As ever, we owe a big thank you to our staff who continue to commit to our charities and recognise the importance we can each play in our own small way to help others.”

Bromleys staff vote for the firm’s charity of the year and in recent years they have raised more than £5,000 for local good causes.

The Trussell Trust supports a nationwide network of food banks, provides emergency food and support for people locked in poverty, and campaigns for change to end the need for food banks.