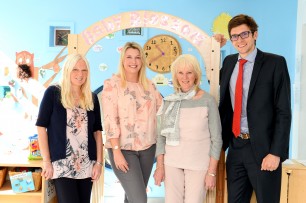 A chain of children’s nurseries has increased capacity with an extension at one of its three sites, and bosses are eyeing further growth as they seek a fourth location in Greater Manchester.

Nicola Sullivan, Alison Davies and Sheila Baldwin established Children 4 Most in 2000 and their nurseries in Ashton-under-Lyne, Hyde and Audenshaw now cater for more than 200 youngsters aged 0-5. They employ a total of 103 staff.

The Hyde nursery, at Flowery Field, has been extended with a new conservatory which increases capacity by 26 places to 76, a rise of 52 per cent.

Now Children 4 Most is considering further expansion, with plans to extend the Audenshaw nursery and a search for a fourth site, potentially in Stockport or another in Tameside.

Its growth comes as demand for nursery provision rises following government measures to increase the number of free childcare places for working parents.

Paul Westwell, a partner at Bromleys Solicitors who heads the firm’s corporate and commercial team, is advising Children 4 Most on its growth plans.

He said: “Children 4 Most is a well-run chain which provides an excellent service to families throughout Tameside.

“The additional space at Hyde provides a much-needed facility which enhances the nursery’s offering.

“We have been involved with the business for many years and are delighted to be advising Nicola, Alison and Sheila given their ambitious growth plans amid rising demand.”

Nicola said: “We have reorganised our Hyde nursery and the new conservatory is allocated as a baby room, fully equipped with sensory and soft play equipment as well as cots and everything else the babies require.

“We needed to expand the nursery because of growing demand, and we are looking to repeat this in Audenshaw and to potentially open another site in Tameside or Stockport.”

Children 4 Most is rated by Ofsted inspectors as outstanding and its nurseries are ranked as being of high or exceptional quality by the National Day Nurseries Association. The chain has also achieved Investors in People status.