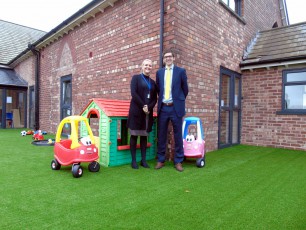 A family-owned children’s nursery business has expanded after transforming a former church for its second venue.

Clockwork Day Nursery, owned by father and daughter Jack and Lorna Meredith, has spent £350,000 on modernising the building in Tameside.

The new nursery, on Mount Pleasant Street, Audenshaw, has provision for 78 youngsters aged 0-4 and is creating 35 jobs.

Clockwork is also running an out-of-school club for up to 24 children aged 4-12 and a holiday club.

Paul Westwell, a partner at Tameside law firm Bromleys, advised Clockwork on the purchase of the building. Royal Bank of Scotland provided funding.

Jack and Lorna established Clockwork in 2002 with a nursery on Queen Street, Ashton-under-Lyne. They set up the business after Lorna was unable to find suitable nursery provision in the area for her then three-month-old son Jack and decided there was a gap in the market.

Clockwork has achieved Investors in People status and has won a host of awards and other accreditations, including being rated as outstanding by OFSTED inspectors in 2013.

Lorna said the time was right for Clockwork to expand with a second nursery.

She said: “We felt there was room in the area for good quality childcare and this location is perfect, as it is near local schools, the train station and motorway.

“The old church building in Audenshaw had a similar feel to our Ashton nursery, as well as the capacity and space we needed.

“We have retained many original features, and have refurbished the building in a modern way with lots of natural light, giving an airy and open-plan feel yet with all the children’s rooms still feeling warm and cosy.”

Paul Westwell said: “Clockwork has gone from strength to strength in Ashton and has built a fine reputation.

“The new site in Audenshaw is well-located and, as well as providing childcare facilities for local families, creates new job opportunities. We are delighted to have advised Clockwork on its expansion.”

“Clockwork embraces traditional buildings and develops a thoroughly modern environment, ensuring outdoor play and learning are incorporated into the design of its nurseries.

“We were delighted to support Clockwork in the development of its second nursery and wish Lorna every success for the future.”