Farewell to Keith after 30 years at Bromleys 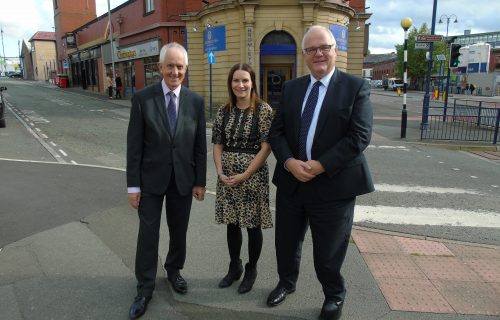 More than 100 well-wishers turned out to give a memorable send-off to Keith Platts, who has retired after 30 years at Bromleys.

Guests at his retirement party, which took place at Banyan Bar & Kitchen in Spinningfields, Manchester, included colleagues, judges, barristers, court and council officials, representatives from the Children and Family Court Advisory and Support Service and solicitors from other practices.

Keith, 67, joined Bromleys in 1989 and was the first solicitor at our firm to undertake childcare work.

He established our successful care team and from a standing start it has grown into a 13-strong department, including support staff.

As part of a planned succession strategy, Olivia Bell took over from Keith as head of the team last year. He then stayed on as a consultant until his retirement.

As a youngster living in Cheadle, Keith was encouraged to become a lawyer by his father Arthur and family neighbour Charles Bloom, a barrister in Manchester who later became a QC and a judge. His Honour Judge Bloom QC was among the guests at Keith’s retirement do.

Keith studied at the University of Hull and then at the College of Law in Chester before starting his career at Betesh and Co in Manchester in 1974, on a weekly salary of £12.50.

After qualifying, he joined Linder Myers before moving to Stockport Council and then Salford City Council as a senior solicitor.

At Salford City Council, he developed an interest in childcare law, which was to shape his future career.

“Lawyers were beginning to get involved in care proceedings, and wardships were becoming more frequent,” said Keith.

“At that time, parents were not even parties to care proceedings, and local authorities could assume parental rights for children who had been in their care for six months just by resolving to do so, without any court hearing.”

He forged a reputation as a leading expert in childcare law, acting for guardians, children, parents and other family members in all types of proceedings relating to children. He also trained and mentored many other solicitors over the years.

Outside of Bromleys, Keith was one of the original members of the Child Concern charity, and was president of the Tameside and Glossop Law Association.

He plans to spend his retirement pursuing his hobbies which include hiking, travelling, gardening, singing with the Philharmonic Choir of Manchester, watching Manchester City and spending more time with his wife Janet, their children and grandchildren.

Keith said he was proud of the growth of Bromleys’ care team and added: “It is now in Olivia’s very capable hands and I am sure it will go from strength to strength, as indeed will Bromleys as a whole, which has grown extensively in recent years despite the challenges for private practice.

A raffle at Keith’s retirement do raised £350 for our charity of the year, Emmaus Mossley.

Bromleys’ senior partner Mark Hirst said: “Keith has played a huge part in Bromleys’ success and has grown his department by recruiting the very best.

“His passion, professionalism and commitment to his clients have earned him his well-deserved reputation as an excellent advocate. We wish him a long, happy and healthy retirement.”