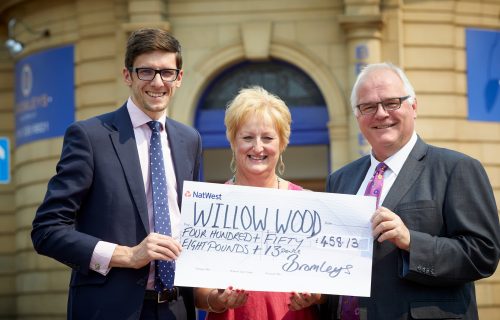 Bromleys has raised £458.13 for Willow Wood Hospice in Ashton-under-Lyne after a team of seven cyclists took part in a charity bicycle ride.

Senior partner Mark Hirst and partner Paul Westwell handed over a cheque to Willow Wood’s Elaine McConnell at the firm’s offices in Ashton.

Mark and Paul were among those who took part in May’s Big Bike Ride around Tameside and Oldham in aid of the hospice. In addition to the seven riders, four other members of Team Bromleys acted as marshals for the event.

Bromleys is a long-standing supporter of Willow Wood, through its membership of the 99ers Business Club, while staff at the firm have organised fundraising events of their own.

The Big Bike Ride consisted of four routes – 8km on a flat cycle circuit and road-based routes of 16km, 35km and 48km, which included some testing hills. Bromleys’ John Longworth, who is 70, took part in the 16km ride and was second across the finish line.

“It costs £2.5m a year to run the hospice, and only 21 per cent of that figure is government-funded.

“The money raised by Team Bromleys will be used for the continued care of patients and their families.”

Paul Westwell said: “The Big Bike Ride, now in its third year, attracts supporters from across Tameside and beyond.

“There are routes to cater for everyone, regardless of their fitness level. The event was extremely well organised and this year teamed up with Tour de Manc to ensure the best cycling experience for everyone taking part.”