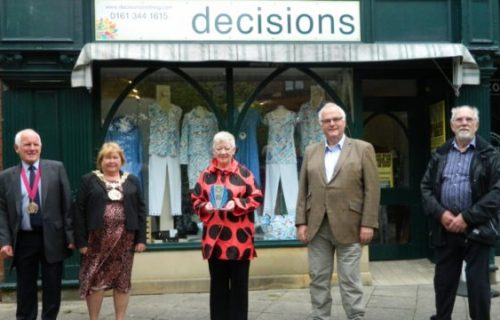 A shop owner who is a leading voice for independent retailers has won a top accolade in an awards scheme backed by main sponsor Bromleys Solicitors.

The awards, in their second year, recognise traders and the benefits they bring to the town. Honours were presented in 10 categories along with the Bromleys’ Sponsor’s Choice Awards and a special prize from the Ashton Town Team, the voluntary group which supports businesses in the town and which initiated the scheme.

Mark Hirst, senior and managing partner at Bromleys, which is based in the centre of Ashton, said: “Val has been a stalwart in Ashton town centre for more than 20 years and her award deservedly recognises her commitment to the area.

“She has always supported and defended local businesses, especially where projects or decisions in the town centre could have a negative impact.

“The last 15 months have been particularly hard for independent retailers, and Val has worked tirelessly throughout the pandemic to help fly the flag for local traders.

“Her passion for independent shopping shines through and is reflected in her work creating Totally Locally Ashton and Ashton Independent Retail, groups which promote the sector in the area. She is also a passionate supporter of Ashton Town Team.”

Val said: “I’m delighted to be chosen for the Bromleys’ Sponsors Choice Award. It’s a great honour to recognised for the work I do and will continue to do to make Ashton the shopping destination of choice.”

The award winners were:

The Ashton Town Team Special Award went to jeweller Harrington & Hallworth. More than 600 nominations were received in total for the awards.

Nigel Skinner, chairman of the judging panel, said: “It was an almost impossible task for the judges, with some fabulous nominations regarding levels of service and custom, but not least because so many independent businesses have gone above and beyond throughout this last year to take those services to another level on behalf of customers who needed them most.

“The winners truly deserve their accolades after much deliberating by the judges – but congratulations must go to all those nominated and gratitude to all their customers who took the time to nominate them for the awards.”