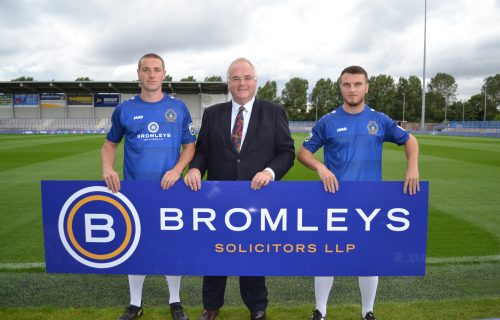 Bromleys Solicitors has agreed a deal to be the official home shirt sponsor of Curzon Ashton FC for the 2017/2018 season.

The Vanamara National League North side play at the 4,000-capacity Tameside Stadium in Ashton-under-Lyne and kick off the new campaign tomorrow (AUGUST 5TH) with a home game against North Ferriby United.

Under manager John Flanagan, the club finished 14th in the league last season and reached the second round of the FA Cup for only the second time, losing 3-4 at home to AFC Wimbledon in a televised clash.

This season will see Curzon Ashton take on Stockport County, Salford City and FC United of Manchester in a series of mouth-watering derby fixtures.

The club is heavily involved in the community through a variety of footballing initiatives and runs more than 40 teams for boys, girls, men and women. Every Tameside resident aged under 11 is entitled to a free Curzon Ashton season ticket.

Curzon Ashton chief executive Natalie Atkinson said: “We are thrilled to have secured a partnership with an Ashton-based firm which echoes the values, thoughts and drive of our club.

“We hope this is the start of a long-term partnership that can go from strength to strength. We are delighted to welcome Bromleys and all their staff to the Curzon family.”

“With a history that can be traced back more than 160 years, we too are very much part of the fabric of Tameside, and this partnership is a great way to promote our brand in the area and beyond.

“Everyone at Bromleys is excited to be working with the club and its fans, and we wish John and his squad every success for the 2017/18 season following their achievements in recent years.

“We greatly admire the work that Curzon Ashton does in the community to enrich people’s lives through football, in particular its commitment to the borough’s youngsters by expanding the number of activities for them.

“The club is making progress off the field too, and that’s great to see.

“Bromleys has a proud record of working with local people, businesses, charities and other organisations, and this partnership is a further example of our commitment to this.”