Charity of the Year and Charity Activity

Tags: Charity of the Year, Forget Me Knot Buddies 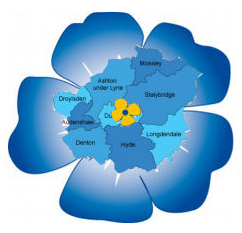 Our charity of the year is Forget-Me-Not Buddies, which supports people with dementia and Alzheimer’s and their carers.

The charity was established in 2013 by Roy Bate after his wife Irene was diagnosed with Alzheimer’s. She passed away in 2017. The couple were married for 54 years.

The charity, which has more than 90 members, is run by carers and volunteers. It provides support and socially-inclusive activities for people living with dementia and Alzheimer’s, their carers and families in Tameside and surrounding areas.

Pre-lockdown, the group would meet weekly at Denton Methodist Church Hall for activities such as musical entertainment, dancing, bingo and quizzes. Trips to the seaside, ten-pin bowling, shows and afternoon teas would also be on the agenda.

Throughout lockdown, we’ve kept in touch with Roy, 82, and his daughter Carrol, who is the secretary for the charity. While under restrictions, they are maintaining regular contact with all of their members and beneficiaries, and they intend to fully resume the weekly groups as soon as it is safe to do so.