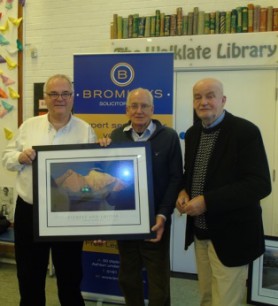 Legendary mountaineer Doug Scott captivated a Greater Manchester audience of more than 100 people when he told how he climbed Mount Everest.

The event, sponsored by Bromleys, raised more than £5,700 for Community Action Nepal, a charity founded by Doug to support people in that country who have helped him during his climbs over the years.

Doug is one of Britain’s best-known mountaineers who became the first Briton to reach the summit of Everest after he ascended its huge south-west face with Dougal Haston in 1975.

Their epic climb has gone down in mountaineering history as ‘Everest the Hard Way’.

That was the title of Doug’s talk at Mellor Primary School in Stockport, where he shared the stage with Oldham-born Paul ‘Tut’ Braithwaite, one of the unsung heroes of British mountaineering.

Paul told how he and Nick Estcourt solved the problem of the highly technical rock band barring access to Everest’s summit, which proved to be key to the 1975 expedition.

More than £5,700 was raised at the event through ticket sales, an auction, a raffle and the sale of Nepalese goods and signed prints. Doug also signed copies of his autobiography Up and About.

Doug and Paul are taking part in a nationwide lecture tour, which runs until March 2017.

John Longworth of Bromleys said: “We were delighted to sponsor this event and help to raise money for a very worthwhile cause. Everyone was highly delighted with the lecture. The audience was capitated by Doug and Tut’s experiences.”