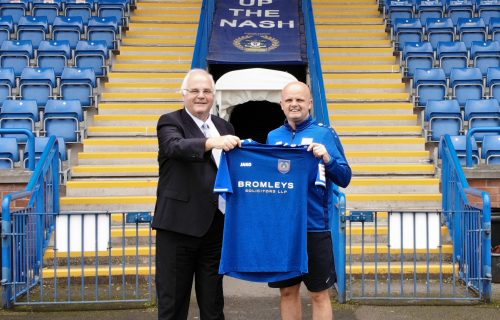 Bromleys Solicitors has agreed a deal to be the official home shirt sponsor of Curzon Ashton FC for the third season in a row.

Our logo appears on the royal blue shirts worn by the first team, who play in the Vanarama National League North. The shirts also feature an image of the Manchester worker bee on the back.

Curzon Ashton – nicknamed The Nash – play at the 4,000-capacity Tameside Stadium in Ashton-under-Lyne and are managed by Mark Bradshaw.

The first-team squad has been boosted by a dozen summer signings, including midfielder Isaac Sinclair, 18, son of former Manchester City and England star Trevor, and striker Callum Saunders, 23, whose father is former Wales international Dean.

Bromleys has increased its sponsorship for this season and senior partner Mark Hirst said: “Our firm is passionate about giving back to the community and we are proud to be supporting the club for the third year running.

“Curzon Ashton cannot survive on ticket sales alone. In order to attract key players, the club needs backing and investment from local businesses such as ourselves.

“It’s much more than just a football club. There is a real sense of community spirit about the place, with many volunteers giving up their time to help out.

“In addition, the club hosts a range of initiatives that cater for groups such as armed forces veterans, people with disabilities, the homeless and schools, and has a walking football programme. It is at the heart of the community and we are pleased to be playing our part in helping it to remain so.

“We wish the club all the best for the season ahead.”

Curzon Ashton commercial director Paul McHugh said: “We are absolutely delighted to be continuing our partnership with Bromleys Solicitors, which will see them be our official home shirt sponsor for the third year running.

“We hope to be as successful on the pitch as our partnership has been off it. With 12 new signings strengthening the first-team squad, it’s an exciting time for the club.”

The Bromleys-sponsored kit worn by the first team last season is being worn by the treble-winning under-18s for this campaign.