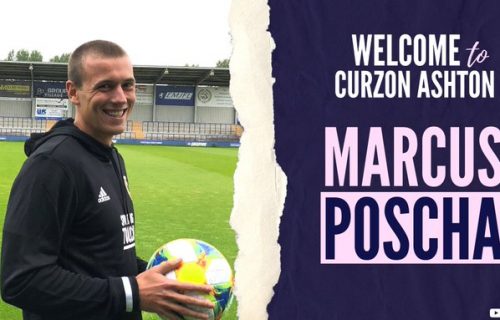 Former Colne defender, Marcus Poscha became Steve Cunningham’s latest summer signing, so we took some time to get to know the new man, who will slot nicely into a new-look Nash back four.

Poscha, who was most recently with Colne, played under current boss Steve Cunningham while at Holt House. The Rochdale-born defender began his career with Bury, where he flourished as a product of their academy, playing every minute of the 2013-14 season for the Shakers youth team.

Poscha, who stands at 6ft 1in, went on to make his professional debut with Bury in May 2014, coming on as a substitute in the second half of a League Two clash with Morecambe. The now 23-year-old failed to register a second appearance for Bury, but went on to enjoy loan spells with Ramsbottom United and Stockport County.

Following his release from Gigg Lane at the end of the 2015-16 campaign, and trials with various clubs over the summer, Poscha signed for Crewe Alexandra. While at Gresty Road, Poscha played the entirety of the 2016-17 season with the club’s U23s side, but was released at the end of the season.

Since then the former Football League defender has been with Colne, where he has proved a popular figure in the Reds back line.

Manager Steve Cunningham was glad to secure the services of Poscha, who left a lasting impression on the boss during their time together in Lancashire.

Cunningham said: “Marcus deserves his chance to step up to this level, following his previous two years under myself at Colne. I trust Marcus to be a steady player at this level, that very rarely makes mistakes.

“He’s been consistent over the last two years, winning Manager’s Player of the Year in 2018/19, and he was in contention for it again prior to the pandemic.

“Marcus will bring a youthfulness to the back line, after we lost a lot of last season’s back line. Marcus will be fighting for a defensive position, he brings strength, athleticism, fitness and a desire to go and win the ball. All the attributes you need for a good young central defender.

“Marcus will thrive with the opportunity to step up and it’s something that he has been hoping for now the last couple of seasons, having played in the Northern Premier League Premier Division, and in the North with me at Colne.

“I’m very pleased to have Marcus on board and I’m sure he will soon become a fan’s favourite for his consistent performances. He’s exactly the kind of player we want to bring to the club, he’s young, he’s got a desire to do well and progress in the game, and he’s also a local lad.”

We wish Marcus all the best during his time with us, and hope it can be a long and successful spell!