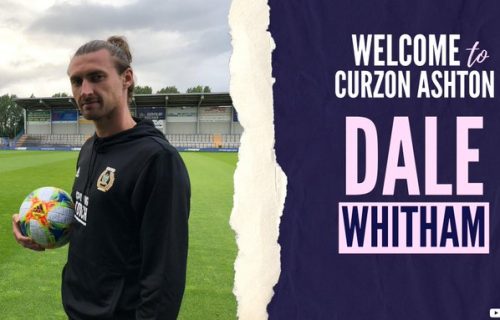 Steve Cunningham revealed that summer signing, Dale Whitham is exactly the sort of personality he wants in his side, and he hopes that he can help the central midfielder rediscover his fine form from his nine years with Chorley.

Whitham arrived at the Tameside Stadium in May, following his departure from Alfreton Town, and Cunningham is looking to call on his wealth of experience heading into next season.

Cunningham said: “Dale has already demonstrated great attributes in pre-season that tick a lot of the boxes for me. He brings experience, he’s got great quality both with, and without the ball, and he’s got a real desire to put himself back on the map this season.

“He’s got a lot of experience at this level, and within the camp he’s already demonstrating that he’s going to be a favourite within the dressing room.

He added: “His attitude is spot on, you want to surround yourself with good people in football, and Dale is just that.

“We’re looking forward to working with Dale, and getting him back to where he was a few years ago, when he was one of the most sought after central midfielders at this step.”