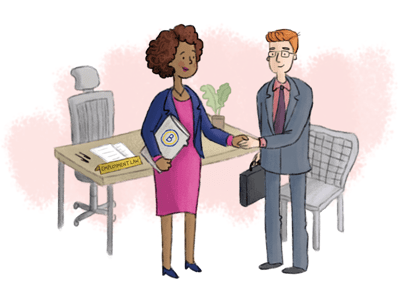 Due to the growing popularity of social media, it is becoming increasingly important for employers to decided where to draw the line with regards to the online conduct of their employees.

There are two popular, conflicting assertions surrounding this issue. The first being that employers have the right to exert control over their employee’s online presence and the second being that employees should have freedom of speech on their personal accounts regardless of any repercussions.

Whichever stance you choose to take, either as an employer or as an employee, the most important thing to consider is where the law stands on the dismissal of an employee due to misconduct on social media.

Twitter is increasing in popularity at an alarming rate, with 302 million monthly active users and 500 million tweets being posted each day. Many employees who are explicitly connected to their place of work on Twitter will often have a disclaimer visible on their page stating that although they are an employee of their firm, all views expressed on their Twitter blog are their own and do not represent those of the business.

The case of Game Retail LTD v Laws, was allegedly the first case to be heard by the Employment Appeal Tribunal (“EAT”) on the misuse of Twitter in the context of unfair dismissal. This case was held last  year and seemed to show the EAT changing tack slightly and showing sympathy towards the employer.

The Claimant had a significant role within the company, GAME,  and was responsible, as a Risk Officer, for over 100 stores.  Mr Laws had set up a Twitter account to monitor any employee misuse that could harm the reputation of the company, however  GAME were forced to follow procedure and dismiss him following an ironic set of circumstances whereby a number of threatening Tweets were written and posted by Mr Laws. The nature of the content was often obscene, including foul language, threats towards football fans and derogatory comments about the police, A&E, dentists, caravan owners and golfers.

At first instance, the Employment Tribunal decided that the dismissal was unfair as the content was in a personal capacity and not linked to the company. This decision was later reversed by the EAT on the grounds that Twitter is inherently public unless the user specifically chooses to restrict their content. As a number of the local GAME stores followed Mr Laws’ personal account, the EAT held that this could be considered as an endorsement.

This case shows that Employment Tribunals can be sympathetic to employers as well as employees. It is important to remember that there is no ‘one size fits all ‘ approach to this as circumstances differ between cases.

As an employer, it is vital that you ensure you have a robust and up-to-date Social Media Policy in place and that your staff are fully aware of this.

If you require the assistance of a solicitor in drafting a Social Media Policy, or are concerned that you have been unfairly dismissed, please contact a member of our Employment Team: